My last post on infant loss discussed the decision to get pregnant after losing a baby. If you haven’t already, you can read from the beginning of my story (<–click to read) where I discovered there was something wrong with my baby, and then delivered at 30 weeks, to only have her with us for a couple of days. If you have been following along, then you might already be ready for this next part.

Because my two previous pregnancies resulted in c-section, with the last one being an emergency c-section, I was pre-scheduled to deliver my baby girl, via cesarean as well. The last month of my pregnancy was much more relaxing than the first 7-8 months. I finally realized that I could actually deliver a healthy baby girl. She appeared to be looking good at this point (after having some growth delays earlier in the pregnancy). Her 3 older brothers were ready for her to get here, and to finally have a little sister they could play with. 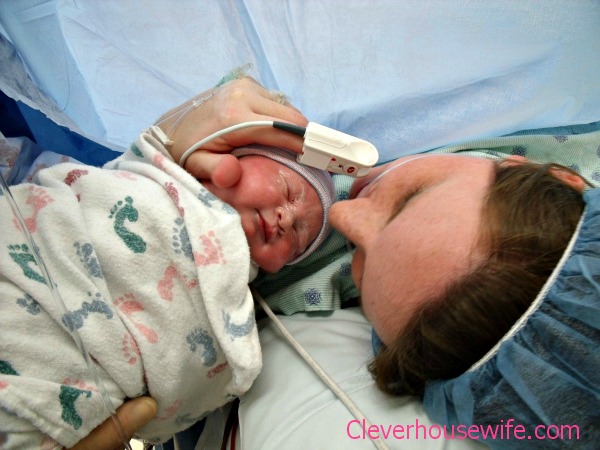 On May 13, 2009, I delivered Brielle Enise Lyon. Brielle was born nearly a full year after Gianna Rae, whose birthday is May 29, 2008, and death was May 31, 2008. I was very very nervous that Brielle’s birthday would fall too close to Gianna’s, and that it would be difficult for me. Having her birthday a couple of weeks before, is just right. I almost feel a peace about having these two sisters’ birthdays so close to one another. I feel that they must really know one another, beyond what Brielle can tell me.

Brielle was born very healthy 6 lbs 12 oz and 19 1/2″ long. No deformities or problems, other than she stood to become very spoiled!

Brielle was born with long, wavy red hair. She was absolutely beautiful! She. Was. Perfect!! I was happy as a momma could be, and was thrilled to have a little girl to doll up with dresses and bows. This photo above is Brielle just a week or two after she was born, in a dress my mom made for her, and on an afghan my sister made.

Having a now healthy baby girl, after delivering an unhealthy one, is a different kind of experience. I went through a couple of different emotions and behaviors with Brielle, that I wouldn’t have gone through had I not experienced something so tragic just the year before. Not too long after having Brielle, I experienced a little bit of guilt. I wish I could tell you that everything was all pink and roses after Brielle, but I want you to know the real truth. Everyone’s experience is and may be different, but this is how it was for me.

I didn’t experience post partum depression, but I had a little bit of sadness. I don’t believe this sadness was attributed to the change in hormones, but to Gianna – the baby that I was replacing. I didn’t think I was replacing my other baby, but in a sense it was. I wanted what I didn’t have: a baby to hold. These feelings of guilt and sadness didn’t last long as I believed Gianna wanted me to be happy, and to have this other little girl to hold and love.

The other thing I experienced was an extreme amount of love. We all experience this to a certain degree; as I did with my boys too. However, this was different. I did not ever want to let Brielle go. I held her a lot, I kissed her even more, and I was always telling her how much I loved her (and still do). The bond I felt with Brielle was different than that with my other children. I wouldn’t ever want my other children to feel that I love her more than them, because that’s not what it is. I love them all so very much. Brielle was more of a miracle to me, after having to live through such a difficult experience with Gianna. I couldn’t fathom anything happening to Brielle – not now, after what I had been through. There was no way I was going to let that little girl out of my sight. I almost felt as if I had enough kisses and snuggles in me, worth two babies. I had so much lovin’ to make up for, that I didn’t get with Gianna. I think that’s how I would explain it.

Brielle was adored by her brothers, and she adored them!

I am happy to say that Brielle is still healthy and strong, at 3 and a half years old. Gianna is not forgotten, and Brielle even talks about her quite often. I find it very interesting as we don’t bring Gianna up super often, but Brielle will bring her up in random conversation, or to strangers. She will tell people that she has an older sister. Like I said, I believe there must be some special bond there that Brielle can’t explain and will likely forget when she’s old enough to explain. Gianna is and always will be a part of our family, but we can have peace as we are, and knowing she is watching us from above, and that we can be with her again someday!