This is a Sponsored post written by me on behalf of Duck Brand provided by ShurTech Brands, LLC. All opinions are 100% mine.

Carving pumpkins is not something that I love to do. In fact, I'm really not a fan. The kids always want to help, it makes a huge mess, and it doesn't always turn out as cool as I think it will. Nearly every year, I try to get out of carving pumpkins by doing something different to dress them up. I have painted pumpkins a handful of times and was ready to try something new this year. So, I turned to Duck Tape®.

WIth several Halloween printed Duck Tape® options, it really wasn't tough to come up with a plan. Plus, this year, I can enter my pumpkin into the Duck Tape® Stick or Treat Contest! I first went to Walmart to pick up the seasonal tape, but my store seemed to have misplaced them and they were nowhere to be found. Luckily I had some Michaels coupons on hand so that's where I ventured next. I picked up a few different prints including the purple spider covered Duck Tape®, which I love!

With help from my sister-in-law, I think we made an adorable pumpkin witch and witch hat out of Duck Tape®. Using a cereal box, we cut out a large semi-circle and curled it into itself to make a cone. We held it in place using staples. To make the brim of the hat, cone opening (the large circle). Then draw another circle about 2 inches bigger than the first circle. Cut out the outer circle first, and then cut out the center, leaving you with a 2 inch wide hat brim.

Next you will make small cuts all the way around the bottom of your cone. I'd say make them about 1/2"-1" deep and fold them out. You will do this so you have something to attach the brim of the hat to. Then slide the hat brim over the cone so it rests on the folds you just created. You can attach with glue or tape. Now you have your hat and it's ready to be covered with Duck Tape®. You will want to make sure to cover the underneath side of the hat brim with tape, in case it can be seen by anyone. 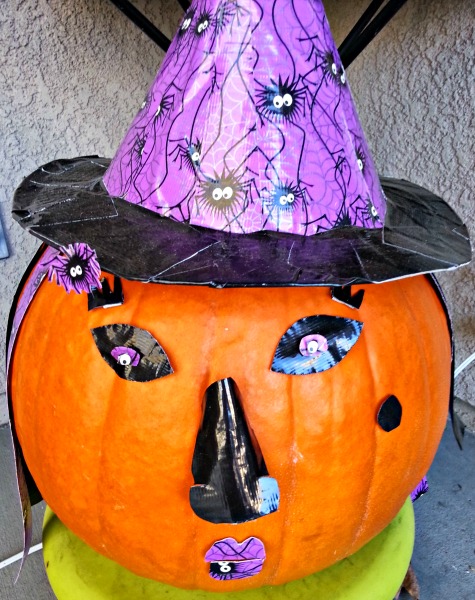 Then we I cut out the spider eyes to create the pupils for the witch's eyes. Alternating between black and spider Duck Tape® we attached hair to the underside of the hat. Then of course, I gave her a mole, some eyelashes, and even cut out a spider from the Duck Tape® and attached it to the hat. I think it turned out great, and my daughter may even use the hat for part of her costume!

Until 10/31, you can enter your creations in the Stick or Treat Contest. The prizes will be as follows:

After you've submitted your pumpkin, I'd love for you to comment here and leave a link to your creation! I'd love to see what you've done! If you need some creative inspiration, visit @TheDuckBrand on Twitter.