Read how I recently took my preschool kids on a magical fairytale adventure to teach them about their 5 senses thanks to Sofia and a little Disney Magic! Plus plan your own Disney party with these Sofia the First Party Ideas, with a Fairytale Adventure party. I received free products in order to host this Disney Kids Playdate. The opinions expressed here are my own.

Last month, during the preschool music and movement classes that I teach, we where learning all about our 5 senses. I wanted to use this month as an opportunity to teach the preschoolers in my class that each one of them have a unique ability to explore and investigate the world around them by using their senses. I decided to help them learn this by having a special “Sense-Sational Fairy Tale Adventure” Party with a little help from some Disney Magic.

To get the kids excited for the special event, I created special invites that I printed out and sent home with them the week before class. To create these invites, I took a photo of Sophia’s Castle from the Celebrations Sofia the First decoration kit. 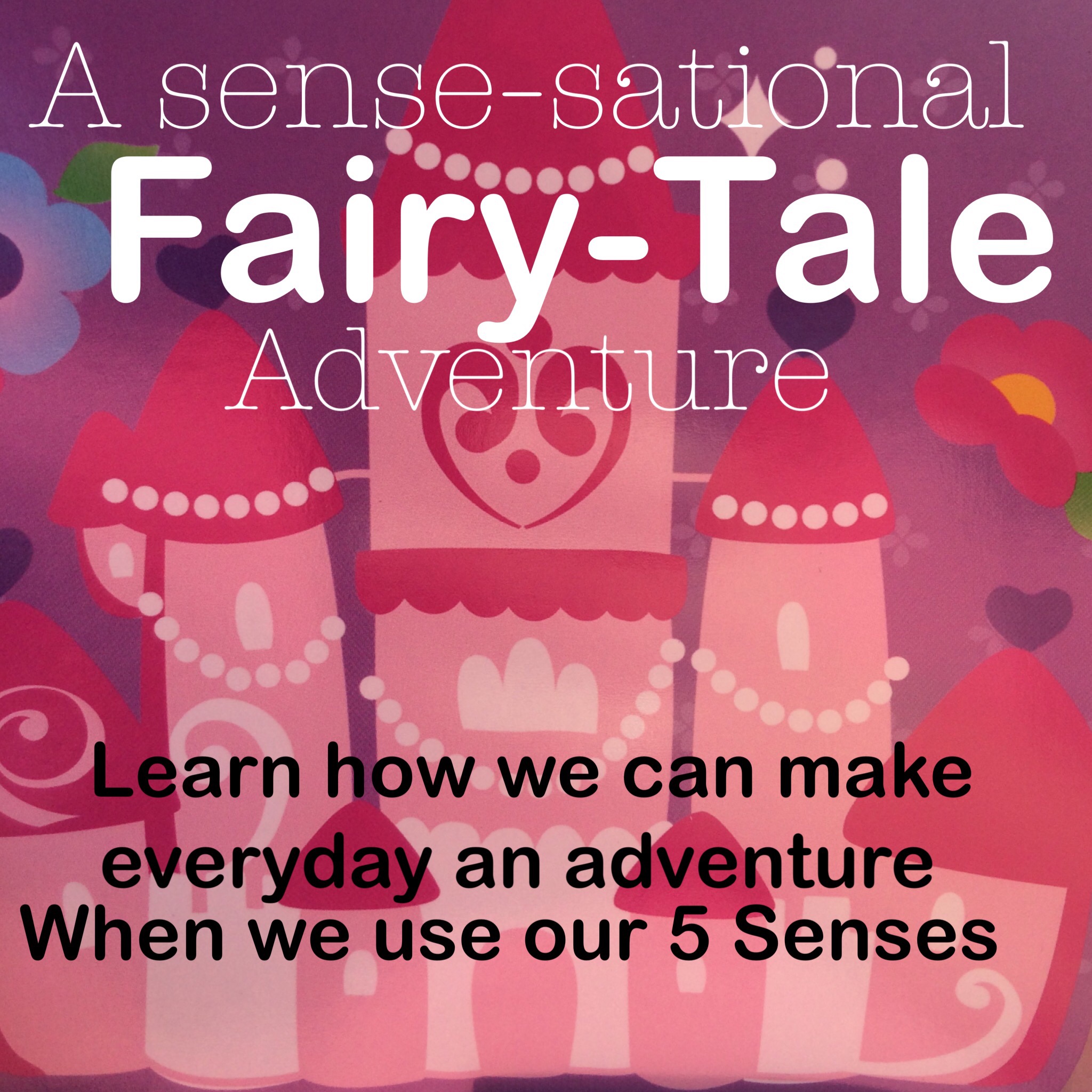 I thought that a Sofia the First theme would be a great way to add a little Disney Magic to this special party. This is because in her Disney Junior show, Sophia is always showing the world that real princesses love exploring their world and going on adventures, which I think is an important message especially for the girls in my class.

As the kids entered class on the day of the party, they immediately noticed the Sofia decorations and some fun sparkly streamers that I put up especially for the party, and were excited for a special class party!

Once everyone arrived, I brought out a special “magical transporter” that I had made using PVC pipe and rainbow colored fabric. I turned on some fun music and let the kids take turns running through the strands of the “magical transporter”that magically transformed my living room into the Land of Enchancia (where Princess Sofia lives). The kids loved this so much and were excited about visiting Enchancia for the day.

Once we had all transformed to Enchancia, I quickly put on a knight’s costume and told them kids that I had been given special instructions from Princess Sofia to dub them all as honorary Princesses and Princes of Enchancia, I tapped each one of them on the shoulder with a plastic sword and presented them with their very own crowns. I gave the girls Disney Celebrations party tiaras and the boys foam crowns that I found at a local craft store.

The girls loved their tiaras and the boys where excited to tapped on their shoulders with a knight’s sword. I explained to them that now that they where princes and princesses, Sofia needed their help with some special royal adventures using their 5 senses of sight, sound, smell, touch, and taste. They all agreed that they were up for the challenge.

For our first royal adventure, I explained that butterflies had gotten loose all over the land of a Enchancia, and Sophia asked us to help her catch them and bring them back to the royal gardens and that they would need to use their eyes and sense of sight to see all of the colors of butterflies and jump and catch them. I then bright out my colored disco light and turned on a song about butterflies.

They kids had so much fun jumping up to “catch” the colored lights and pretending they had that colored butterfly in their hand. It was a great way to learn about the sense of sight while working on our colors and having a fun imagination activity.

For our next royal adventure, I explained to the kids that the sorcerer, Cedric had cast a smell spell to trap all of the smells in the kingdom, and Sophia needed them help to find them.

Before class, I prepared Sofia party cups with strong scented items in each including garlic, lemon, cinnamon, and a scented candle.

I used rubber bands and wax paper to make a covering for each cup, and poked tiny holes in it.

Before the party started I had hidden the cups around the room. For the activity I had the kids explore the room to find the cups and use their sense of smell to smell each cup and make observations about each smell. They thought this was a pretty great activity… Until they found the garlic, and no one loved that smell!

During her show, Sofia is always meeting amazing fairytale friends from Disney princesses like Belle and Ariel to giants and palace trolls. I thought it would be fun for the kids in my class to also meet a fairytale character during their visit to Enchancia. So I brought out my pig/ big bad wolf puppet and some touchable straw, wood and bricks and used them to tell the story of the 3 Little Pigs.

After the story, I explained to the kids that the big bad wolf had stolen all of the palace jewels and Sofia had asked them to help her find them.

I spread out a Sofia plastic tablecloth on the floor for the kids to sit on (to keep things mess free). Then I brought out a tray of Kinetic Sand that I had prepared with plastic gold coins and bead necklaces hidden in.

I told the kids to use their sense of touch to find the hidden jewels. This was, by far, their favorite activity of the day! They loved squishing and molding the sand and got a big kick out of finding the jewels.

After the kids where done with the Kinetic Sand, I told them that Sophia was so thankful that they had had helped with all of the Royal adventures, that she had invited them to her palace to make crafts and have a Royal feast.

For the craft project, I gave each child a Sophia paper plate with a few beans on it, a reused water bottle and a few Sofia and Mickey Mouse stickers.

The kids got to use the supplies to make their own sound makers, decorated with Disney stickers.

Two of the kids in my class (a brother and sister) told us that they where actually about to leave on a trip to Disneyland right after class, so they were excited to make a shaker that they could use to make music on the drive all the way to Anaheim (I’m not sure their mom was as excited about that)!

As the kids finished up their craft project, I brought out their Royal feast served on special Sofia napkins. I served a variety of flavors.. Cinnamon Grammy Crisps, fruity flavored Kellogg’s Fruit Snacks and peanut butter kids Clif Bars. I told the kids to use their sense of taste to experience the different flavors of snacks. After a busy morning of Royal adventures, they where all hungry and more then happy to use their sense of taste!

As the parents started to show up, I thanked the kids for coming to visit Enchancia today. I told them that they don’t need to be in Enchanica to go on fantastic adventures. But that they can have adventures any time by observing and exploring the world around them using their 5 senses.

I’m thankful for the fun day I had teaching my preschool kids about our 5 senses, and for the little bit of Disney Magic that made the day extra special!