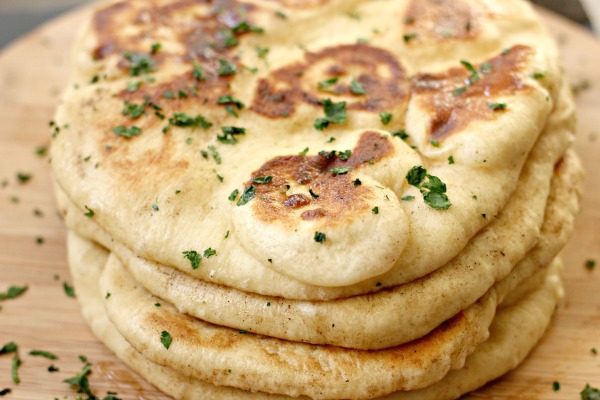 I am obsessed with good Indian food! Naan bread dipped in Channa Masala, Veggie Pakora, Tikka Masala, and the list goes on. Mmm! It wasn’t until I moved away from my hometown, a few years ago, that I discovered a love for Indian food. I had tried it once as a child and found it to be too spicy, and was left unimpressed. In my adulthood, I found my tastes had changed. I decided to be brave and try an Indian buffet while living in the bay area, and I fell in love. It was a couple more years before I found another tasty restaurant, which then became my favorite for Indian food.

Unfortunately I moved away from my favorite restaurant, and am left to make my own if I really want to be impressed. I thought I would start my homemade Indian food adventures with Naan Bread, because who doesn’t love that? Fairly simply, and not much different than making bread, aside from the frying process.

Naan is fantastic by itself, or as a side dish to just about anything. In fact, we just ate our leftovers with a little butter and jelly, for breakfast. However, nothing quite beats the garlic butter that is spread on the naan before cooking.

After the dough is made, allow it to rise for about an hour, until it doubles in size – similar to bread or cinnamon rolls. From there, just divide into 8 even pieces and roll out and spread homemade garlic infused butter in each side, and fry for just a minute per side. So easy, and seriously delicious. Best is served while warm.

A great go-to cast iron skillet for making your Naan Bread, or really anything that requires a skillet, is this Lodge Cast-Iron Skillet. Fantastic!