When it comes to animated monster movies, Hotel Transylvania 2 really holds the torch. Great humor, family relations and just a lot of fun. As a family, we have seen both movies in theaters, and are excited for the Blu-ray release in January 2016.

In celebration of the release, we decided to throw the ultimate monster party for Hotel Transylvania 2.

I got a sneak peek at some of the fun and interactive “Extra features” found only on Blu-ray and digital download, so we took some party decorating cues from that. There you will find recipes and decorations to help throw a monster party that will wow any age. Instead of a bat garland, which is showcased in the extra features, I cut out bats, laminated them and punched holes in the top and hung them on a spooky tree I borrowed from my mom.

I personally love movie themed treats, so that is exactly where I began for our monster party. I started with the simple and the obvious. We are dealing with bats and vampires here, so I whipped up some red punch and made sure that every straw and guest got a set of fangs. All you need is red construction paper for a set of lips, and some white paper from which to cut out some fangs. Glue these together and punch a hole through the middle.

One of my favorite characters in Transylvania 2 is Frank (Frankenstein). I know many people have done the whole Frankenstein Pudding Cup thing, but I changed it up just a tad. First of all, Frank is more of a blue than a green, and for hair I used chocolate sprinkles. You’ll also notice that he has more of a friendly face than a scary face, so that’s how I drew him. He was tasty, too!

I have done mummy cupcakes before, but I found an ugly sweater sugar cookie kit at the store, and thought the shape would make the perfect mummy cookies. I topped them with icing then strips of fondant, for that mummy look. Gel icing made for the perfect eyes. 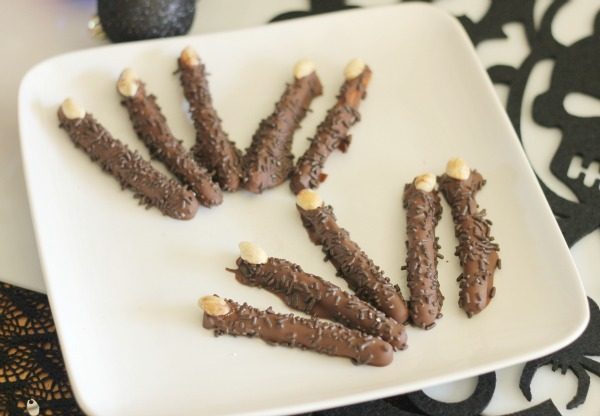 My kids are quite fond of the werewolf family, so together we made edible werewolf claws! Totally fun, but also really tasty. I used the smaller pretzel rods, dipped them in chocolate and covered them with more of those chocolate sprinkles. Then I placed a peanut as the fingernail.

Now this monster party is ready to rock! With our tasty monster treats in hand, we had a great family movie night with Hotel Transylvania 2. I certainly love the many ways we can enjoy movies these days!

Bring home the #1 Monster Movie of the Year with tons of family friendly extras. Hotel Transylvania 2 is now available on Blu-Ray and Digital HD!