Ever since The Notebook, I’ve been a huge fan of Rachel McAdams. I think she is just darling, and is great at what she does. Playing Doctor Strange’s (Benedict Cumberbatch) love interest was not quite what you’d expect. Christine (Rachel McAdams) is no passive sit-around kind of woman. She’s a surgeon who has no problem putting the Doctor in his place. It’s not all fairytales and butterflies, but the rooted connection the two share is undeniable. Interviewing Rachel was just what I dreamt it would be, and she is an absolute natural beauty.

Rachel McAdams on her role as Christine:

On joining the Marvel Universe

It was everything I had hoped for and more really. I assumed I would be working with the crème de la crème really and I was. So it was just great to be in such great hands. From costumes to everything was just so well done, so beautifully thought through and well-crafted. They had real things on fishing wires to actually try and scare me, that’s how thoughtful they were.

Preparing to play a doctor

I’m a little funny when it comes to blood and guts and stuff like that. But my mom’s a nurse so I’d kind of grown up around medicine which is probably why I became an actress instead. I did get to shadow some amazing brain surgeons, a female brain surgeon in Toronto, another surgeon in London. And then we had a surgeon onset every day. He taught me to do sutures and was practicing on raw turkey breasts. Oranges were easier to take in my purse so I could practice wherever I went.  I became kind of obsessed with the suturing. It was almost like knitting. I just took it everywhere with me and I think I looked little crazy but it was fun.

Then I read this really great book called “Do no harm,” by Henry Marsh who is a world-famous brain surgeon. The book was phenomenal and really eye-opening when it comes to being your own advocate when it comes to your health. 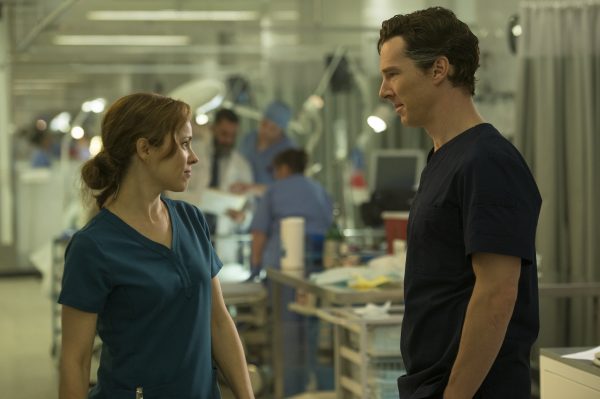 Wearing scrubs every day when everyone else is in superhero stuff, Rachel loved it. “I got to wear orthopedic running shoes every day, So I was really grateful for that. I was a little jealous of the levitation cloak but I was happy to be comfortable.” When asked if she got to put the cloak on, Rachel’s response was, “No, you couldn’t touch that thing. Sacred cloak. No, I just got to look at it.”

Preparing to be startled

You hope they get it on the first one because that is usually startling, the first time. And then you just kind of fake it the rest of the time. They were very helpful — I was never quite sure where the startling was coming from, or where the sounds were coming from. I’m also a total scaredy-cat in real life, so you know it’s not a far stretch for me.

Rachel drew on her mom’s compassion as a nurse, to help capture emotion in her role. She also says this of acting with Benedict. “Benedict is such an extraordinary actor that you just have to be present with him and it all kind of falls into place. I mean, we did a lot of crying together. We cried one day for eight hours straight, every single take. I’ve never been able to do that before. I mean, you know it comes, it goes, it comes back again. But with him, he’s so emotionally available and present that I’d look at him and I’d start crying. We both had these incredible headaches at the end of the day.

Rachel is truly a talented actress and does Christine justice in Doctor Strange. I can’t wait for you to check it out in theaters on November 4th.