The infamous Mads Mikkelsen, known for his role as Hannibal, makes for one excellent villain in Doctor Strange. The once good man, Kaecilius, is taken under The Ancient One’s wing and taught to become a Master, who then turns dark. Boy does Mads get this role right! When interviewing someone who frequently plays a villain, you don’t really know what to expect. They are just people, but do they relate to their role? Mads was fun to interview, and it was fun to chat with him about being type cast as a villain, and how he felt about being in his first Marvel film.

Mads Mikkelsen on his role as Kaecilius:

We went to do some of the tests and we were doing the makeup, and I insisted on bringing the costume just to see how it looks together. They were spot on. We were sitting in there for hours trying out this makeup, and I was like, “Do I really wanna do this every day?” But then it turned out so fantastic, I was like, “Yeah, that’s it. Three hours every day, we’ll do it. It’s worth it, really.”

“While getting makeup on, you just close your eyes and go through the scene you’re gonna do today, and it’s a transformation into preparing.”

I am being typecast as a villain to a degree over here. If the alternative is not to work over here, I’ll take the villain. Luckily I do a lot of different things back home in Europe, so I’m not starving in the sense of like, why am I always the villain? If it’s this kind of villain, I’ll take it any day.

Tapping into the villain, For me the script is always the most important tool. From there I’ll develop the character with the director, of course.

Some of my favorite actors have been playing villains as well. Christopher Walken is a hero of mine, and I think he has the ability to somehow make the villains likeable. The joker is a fantastic example. We love to hate him, you know? 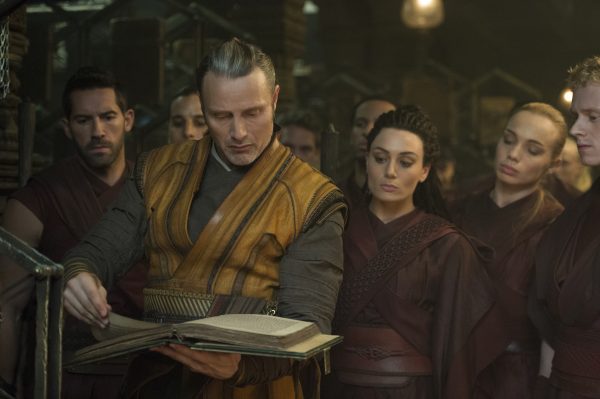 The scene where we fight, I think we did that fight sequence for three weeks, and, and, and it’s probably eight or 10 hours, fighting each other every day. You do hurt the next day. This is a big sequence, because one thing is to do stunts and we can do that in a certain amount of time. If you have things crashing, it takes time to set it up, and make sure that everybody’s fine. It takes time. And if you mess it up once, it takes three hours to rebuild it.

The costume was quite heavy. Not crazy heavy, but it was not light. Obviously we just get in shape. Every day, the more you were wearing it, the stronger you got. It felt featherlight in the end, but in the beginning it was like, serious? Am I gonna jump up there now in this? Like, wow. The more we worked out with it, the more it makes sense.

I always keep something from the set, but I can’t tell you what because they’d want it back. To prepare for a scene, I often walk around in a corner somewhere, to ready myself.

Mads is quite the villain, with seriously awesome makeup, in Marvel’s Doctor Strange.

Be sure to catch Doctor Strange in theaters everywhere November 4th!

I was invited to an all-expense paid trip for the purpose of screening Doctor Strange, and interviewing the cast. All opinions expressed are my own.

All photography and written text on this site are Copyright of Clever Housewife © 2012-2013, unless otherwise noted. Material may not be duplicated, published or re-written without permission. All rights reserved. Please send all inquiries to [email protected]verhousewife.com