Growing up, the only time I ever saw either of my parents playing Solitaire was on family camping trips. Then when computers and the internet became popular, I was in junior high, and I gained a love for playing Solitaire on the computer – It was a fun way to let my mind go blank, between homework sessions. The card game of yesteryear has reached a new level of entertainment, right?

I’m talking about Solitaire by MobilityWare – which has Daily Challenges, and is always updating with new features. Did you know with this app you can either play by yourself – just to take up those wasted minutes waiting in line, waiting at the doctors office, waiting for kids at lessons or practice, or waiting for just about anything; OR you can play with others. You can even play with multiple players and compete against each other at the same time. 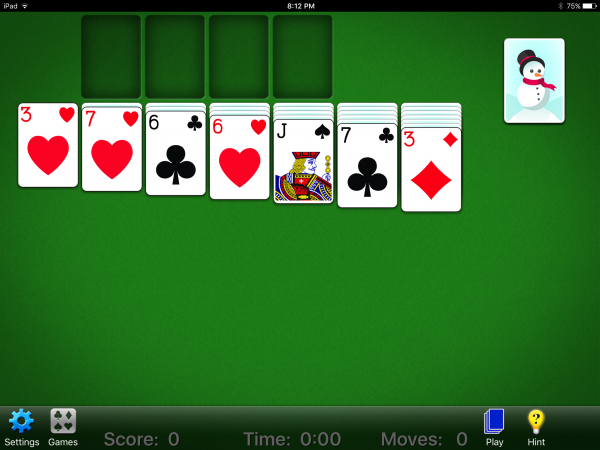 With the choice of playing alone, or with others you can test your skill and Solitaire strategy against a completely random player, or with friends. Just because it’s Solitaire doesn’t mean that the play has to be solitary. When you challenge others, you’re each dealt the same hand and then you compete against each other at the same time. Like I said, this isn’t your parents Solitaire.

Daily Challenges can be played either on your iPhone, iPad, iPod touch, and now on the Apple Watch! You play the current day’s deal and then you can replay it as many times as you want on that day. You can also enjoy seasonal themes like the the Winter and all-new New Year’s Eve theme.

If you’re feeling a bit down because you haven’t won at Solitaire for awhile, you can select The Winning Deals feature which guarantees that your game will deal at least one winning solution. Just use “Show Me How To Win” to help you through the moves required to win the deal, if you need a little extra help.

No need to waste those moments waiting or when you just need some personal time – play Solitaire on your iPhone. It’s a great go-to card came to help you pass the time. You’ll love the many new features and updates. And if your number is up – just select the Auto Complete to finish your game. It’s ALL good. So download Solitaire today!!