I’ve been to a lot of places and have experienced many things, but recently visiting the Medieval Times Dinner & Tournament in Buena Park was a first for me. I’ve always dreamt of going to a Medieval Knights tournament and when I finally got to take the family, it did not disappoint. 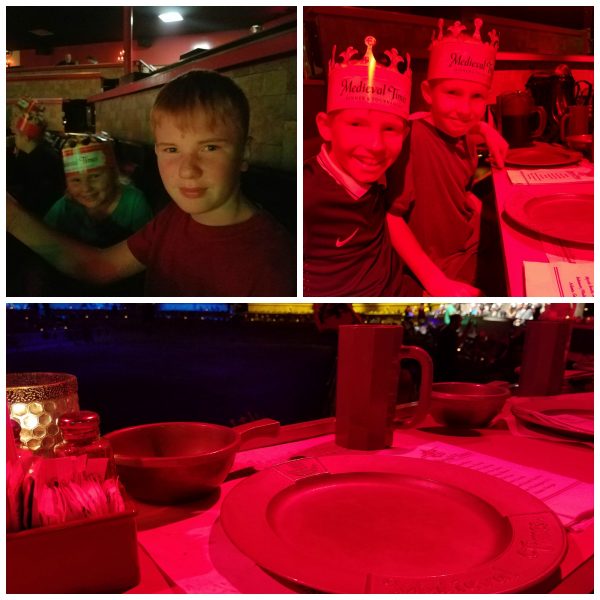 With everything from the venue, to the food and entertainment, the Medieval Times Dinner & Tournament made for a fantastic evening. I highly recommend a night out at the arena, for locals and vacationers in the LA area. 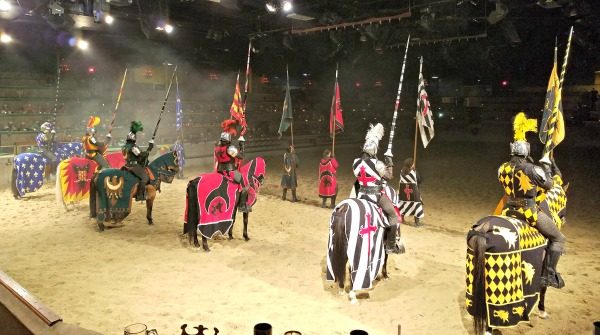 The tournament begins with a storyline with a princess and several knights vying for her attentions. The knights go through a series of battles and stunts and tricks, to get noticed by the king and princess. They are ranked in each task, and awarded a flower before the next contest.

A really cool part of the night is how the cast does a great job at making the audience feel a part of the show. Each colored knight has a designated cheering section and after they get their flowers, they toss them to members of the audience. We were rooting for the red knight, and Miss Bea and I were both tossed a carnation, which made us a tad giddy.

Each member of the family was thoroughly engaged in the show, and my boys were impressed with how real all the fighting appeared to be. They loved the clashing of swords and tumbling around in the sand.

For us, the best part of the night was the very end. You see, this really is a tournament where one knight comes out on top. That knight happened to be the red knight. Not only was he to win the hand of the princess, but he got to pick his own “princess”, or rather, queen of love and beauty, out of his cheering section. He picked Bea! Talk about making a little girl’s night!

Our knight climbed up into the stands, lifted Bea up and gave her sash, tiara, flower, and a photo of her with the princess and him. She was a tad starstruck and was tickled to be chosen out of the crowd, with all eyes on her. I was squealing with excitement and this was truly a night Bea won’t forget.

After the tournament, the cast was out in the lobby for photos, so we took Bea’s photo gift and had everyone autograph the frame. She still treasures this keepsake and occasionally talks about her night with her Knight.

Medieval Times has 9 locations across the country, so be sure to make a stop by one near you, or in your travels. It’s so worth it!