How a makeup artist can turn such a handsome human being into such a gruesome character is amazing talent. Professional makeup artists did such a thing with Javier Bardem as Salazar in Pirates of the Caribbean. Javier Bardem makes for one excellent dead pirate, and watching him in Pirates of the Caribbean: Dead Men Tell No tales is mesmerizing! I had the chance to sit down with Javier Bardem and chat about his role as Captain Salazar, and I could just listen to him all day! This right here is a very charming man who was joyful the entire time!

Makeup application took Javier 3 hours every day! He joked that it didn’t take as long as us women to get ready. Javier was worried his facial expressions wouldn’t show through his mask, and it would kill his performance, but it surprisingly worked. The facial expressions + makeup and black goo oozing out of his mouth, made Javier one dark character after one thing – revenge! While the black goo was “supposed” to taste like chocolate, he referred to it as monkey poo. Not so tasty.

Javier’s Involvement with Pirates of the Caribbean

In 2010, Javier was traveling with Penelope while she was shooting Pirates 4. He loved the scenery (Hawaii, LA and London), and was jealous of the amazing production, the water, special effects, the boat and sword fighting. So Javier said, “Jerry, Jerry, please give me a job!” Then he got the call five years later and he was honored.

What it was like seeing the end result of Salazar

Javier was most amazed by the constantly moving hair. Working with the CGI was a little like working in the dark because he wasn’t sure how the hair would be moving around him. Most everything was shot in studio so it was neat to see it all come together.

I learned that Javier is a talented artist! He would often bring his own sketches to the set, of how he saw the characters and movie in his own mind. Javier is very drawn to faces and expressions, which is kind of why he likes acting. He loves to draw with pencil and ink.

“I met him in 1999 in Mexico in Vera Cruz doing a movie called “Before Night Falls” by Julian Schnabel.”  The story of Javier meeting Johnny Depp for the first time is hilarious, so I’m just going to share what he had to say…

They’ve been friends ever since! Javier says Johnny was a gentleman back then. He was super nice, very caring, very funny, and doesn’t give himself too much importance at all. Then he does this movie in 2015 and Johnny is the same guy! Sometimes they would have to cut a scene because Javier was laughing too much. He thinks of Johnny Depp as “a great colleague and a beautiful guy.” 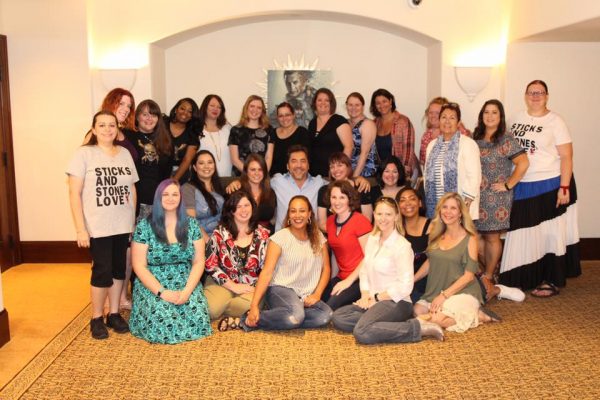 There you have it, folks! Javier Bardem is charming and handsome, and makes for an excellent villain as Captain Salazar, in Pirates of the Caribbean: Dead Men Tell No Tales. Be sure to see the movie in theaters this weekend, May 26th.

I was provided an all expense paid trip for the purpose of covering the new Pirates of the Caribbean and Bambi releases. All opinions expressed are my own.