School of Rock the Musical Comes to San Francisco

There has been a lot of chatter about my love of music on my blog and social channels. It should be no surprise how much I love Broadway and musicals too. I used to want to be a stage performer, but don’t have the chops so I am content to revel in the on-stage talent as often as I can. Last night I got to do just that with Miss Bea, because School of Rock the musical is in San Francisco! We got to have our girls’ night and attend the show and it was awesome!

When School of Rock, the movie came out, the whole family loved it so I’ve been eagerly waiting for the musical to come near us so I could take the kids. Unfortunately the whole family didn’t get to go to this one, but Miss Bea was thrilled she got to attend. This is right up her alley since she would love to be in musical theatre someday. I love attending shows at the Orpheum Theatre in San Francisco because it gets us out of our small town and to partake in something bigger than us.

First of all, the music for School of Rock is done by Andrew Lloyd Webber, so you know it’s going to be good. The musical is based on the 2003 movie starring Jack Black, where an out-of-work rock singer and guitarist pretends to be a substitute teacher at a prestigious prep school. After identifying the musical talent in his students, Dewey forms a band of fifth-graders, in an attempt to win the upcoming Battle of the Bands contest.

Let me just say the cast is amazing, but those kids…..simply phenomenal! These kids are between 9 and 11 years old, can act, dance, sing and play their instruments. During the intermission we read up on how they cast the kids and they really go for musicianship, which these kids have. We were so impressed to learn the kids are actually playing the instruments on stage, and they totally rock! By the end of the show we truly felt like we were at a rock concert. I was especially impressed with Vincent Molden, the boy who plays Zack, the lead guitarist. He plays like a full-blown rockstar and it’s so fun to watch. 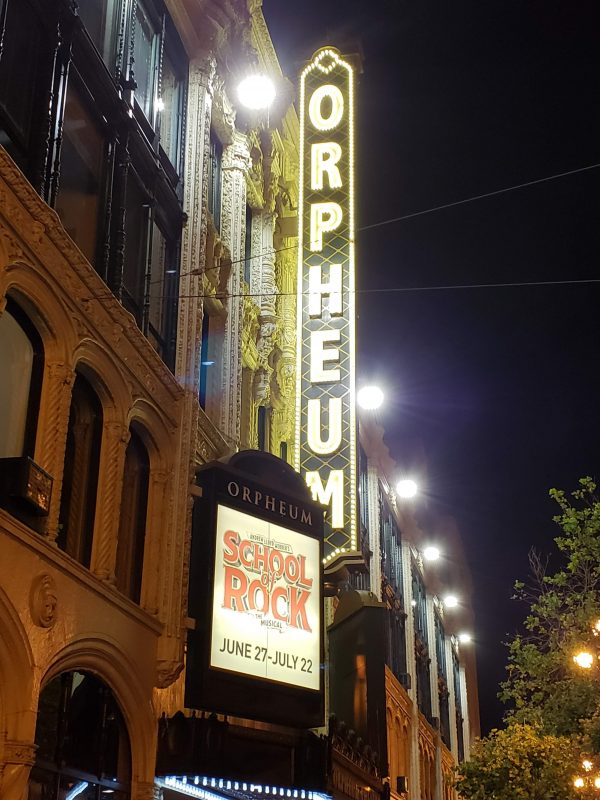 The kids have just enough sass and lots of heart. Rob Colletti plays Dewey, and I’ve got to say he reminds me a lot of Jack Black in the same role. He has a similar sense of humor and is oh so talented to boot. The musical follows the movie pretty closely so if you loved the movie, you’ll certainly love the musical. It has more music of course and it’s loads of fun. This was just opening night so there’s still time to get your tickets and head to the Orpheum Theatre and catch School of Rock the Musical! You won’t regret it – I even heard people around me say it was the best musical they’ve seen!