This post is sponsored by BabbleBoxx.com on behalf of Turtle Beach.

Ever since my twins were little, we would joke that they would prefer to be inside the tv if they could. They would watch tv while standing directly in front of it, and now they play video games while standing as close as they can to the screen. They really get into their gameplay by jumping with their onscreen character and moving as they move. It’s entertaining to watch, for sure. We’ve discovered a new way to really get into gaming and play louder with a new Turtle Beach Gaming Headset.

My boys all love gaming, whether it be on their phones, Xbox, Wii U or the computer. As their parent, I work to help them moderate their time spent on various activities, but while they’re free to play, I want them to have a good time. I do love that they’re able to interact with their friends through their gaming, and that’s with help from great gaming headsets.

You see, if my kids were to just veg out in front of a screen all day and not interact with anyone, I wouldn’t be too happy. Parents are often complaining that with the invention of texting, kids don’t know how to verbally communicate anymore. One of the reasons I do allow my kids gaming time is because with headsets like the new Turtle Beach Recon 200, my kids actually talk to their friends while they play. They don’t just talk about the game itself either – they’re able to actually have a conversation like the good ol’ days. The Turtle Beach Recon 200 fantastic because it’s an affordable option, compared to some wireless gaming headsets in the hundreds of dollars.

To make conversations smoother, the kids can adjust the volume of their voice inside the headset, making it so they never have to shout (yay for parents)! Then when they want to mute their voices (when mom is talking, usually), all they have to do is flip up the mic. 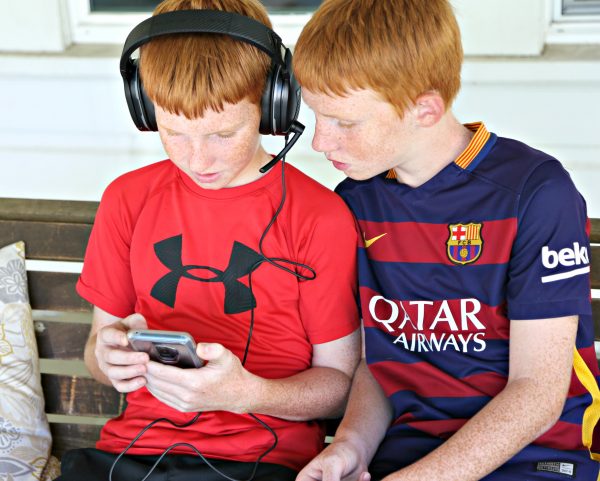 Now when it comes to sound, the Turtle Beach Recon 200 has just what you need! For gamers who like to feel like they’re inside the game, the new powerful amplified audio is louder than ever. The rechargeable battery-amplification and surround sound makes it so you never miss a piece of the action. You can also opt to boost the bass, if you’re feeling sassy.

My kids have tested out several headsets and they’ve been mighty impressed with the quality for the price. The Turtle Beach Recon 200 is compatible for multiple devices: Xbox One, PS4, Nintendo Switch, PC, and cell phones. When my boys aren’t playing on the Xbox One, they’re playing on their cell phones. Because our little phones don’t get very loud, and we may be in spaces where we can have the volume on, this gaming headset sure comes in handy. My boys love taking it with them when they play at friends’ houses too.