Looking to keep the kids busy this winter? Check out some new ways to use Nerf Guns and check out some cool new Nerf Products which I received for review. 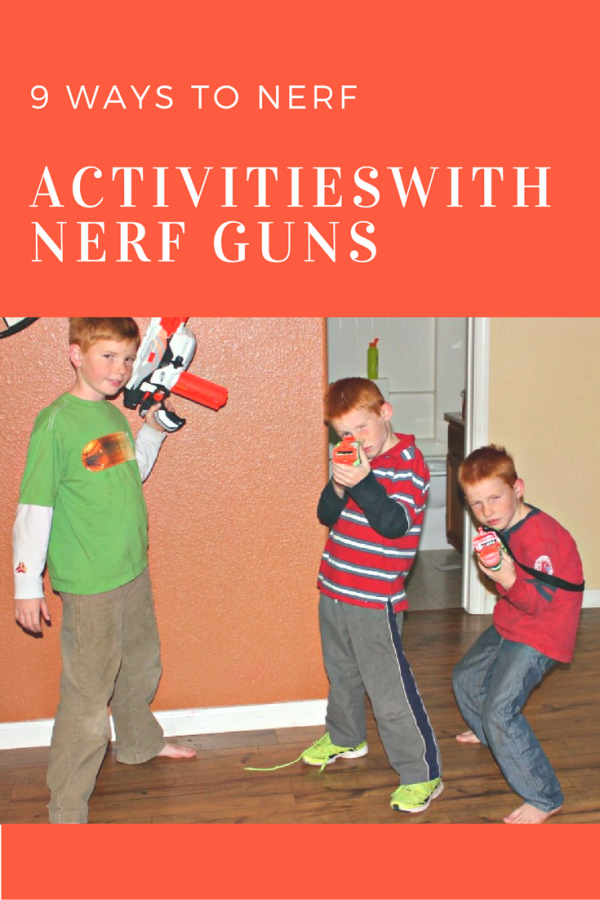 For my family, the week between Christmas and New Years is a bit of a whirlwind. We have a few birthdays in that week, and my kids are still exploring the novelty of having new toys. Once all of that has settled down, I love spending some time with my kids and helping them really explore their new gifts. Its so much fun to inspire them with some new ways to play and then let their imaginations take over!

One of the toys that is great to do this with is Nerf Guns! If your kids got Nerf Guns for Christmas, check out these ideas to take their Nerf-ing to the next level! Or invite friends over for a fun afternoon or Nerf Gun themed party!

* Helium Powered Shoot-Out: Get more fun out of target practice by using 4 or 5 helium inflated balloons with silly faces drawn on them. Make sure they are on strings and weighted so they are on the ground then knock them down with Nerf darts.

* Pin The Tail Target Practice: Play the classic party game of Pin the Tail on the Donkey but try shooting nerf darts instead of “pinning” the tail. Try it full sighted or blindfolded for more fun!

* Hopscotch-When we play hopscotch, we throw a rock and wherever it lands you have to skip over that square. Mix it up by shooting Nerf darts at the hopscotch board in place of a rock.

* Art Attack– Try setting up a large piece of butcher paper or cardboard in the back yard. Then let the kids dip the tips of their Nerf Darts in washable paint. Let kids shoot those darts at the paper for an art attack!

* Night Fight– Add some glow to your next Nerf gun fight by turning out the lights and breaking out the glow sticks for a glow in the dark night fight!

*Combat Training Obstacle Course– Set up a fun obstacle course for the kids (or have them take turns setting it up for each other) that has targets set up at various points in the course. Have them carry their Nerf Gun with them through the course and stop to hit the targets. You could have the kids do a speed round, accuracy round or invent a scoring system to incorporate both!

If you don’t yet have any Nerf Guns or are looking to add to your arsenal, there are some great products on the market right now that would make these games even more fun!

The Nerf N-Strike Elite Rapidstrike CS-18 Blaster would surely take these games to the next level. This gun boasts that it fires at a rate of 3.5 darts per second, making it the ultimate Nerf Gun for when speed matters! Not only is it fast, but it is a powerful, with darts being able to fly up to 75 feet! This gun also has a clip that is able to hold 18 darts, giving your child more time playing and less time re-loading.

Nerf has also released an item especially for girls! The Nerf Rebelle Heartbreaker Bow is a crossbow decorated with a feminine pink and purple Phoenix design that fires darts a feisty 75 foot distance! The crossbow design allows you to shoot your darts while perfecting your archery skills.

When you are done with your shoot-outs, try the Nerf Cyber Hoop Set for a change of pace. This set takes the classic “behind the door” bedroom basketball game, up
a notch. To start, players download the free Cyber Hoops app for an apple device (IPhone 4, 4s, 5, IPad, IPad mini, or IPod Touch). Then as they play, the Cyber Hoop set transmits scores to the app. The app then tracks scores and stats, captures video and even allows for players to play with other friends virtually!

To get these and other great products from Nerf visit retail stores nationwide or visit the Hasboro Toy Shop online.