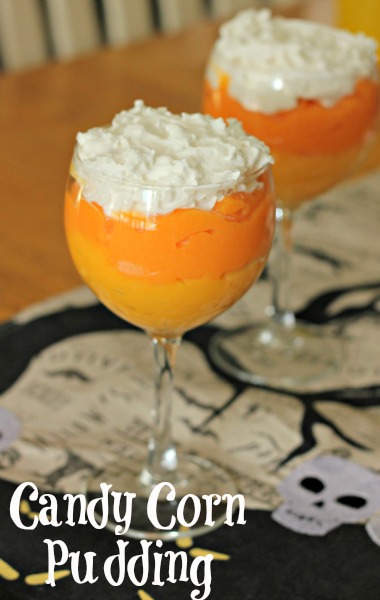 With Halloween just a week away I figure it is about time I start whipping up some festive Halloween treats. Last year I discovered TruMoo Orange Scream, and we had fun creating unique recipes where I substituted milk for the TruMoo Orange Scream. It has a kind of orange creamsicle flavor about it that gives treats an extra boost of flavor. This year I took cue from TruMoo itself and whipped up their delicious Candy Corn Pudding.

First of all, I did not know that instant white chocolate pudding existed. When the Candy Corn Pudding recipe called for it, it took me a bit to find it on the shelves, but alas, it does exist! One could use regular ol’ vanilla pudding, but it wouldn’t have quite the same flavor the white chocolate adds. Think creamsicle plus white chocolate, topped with whipped cream. Um, yum!

Some things you should know about TruMoo:

If you have made the Candy Corn Pudding and still can’t get enough of the fun, then give the Freaky French Toast a try! Now you’ve got breakfast and dessert covered.

Check out other TruMoo products, recipes and ideas, over on the TruMoo website. While I was there I also noticed a little giveaway that you can easily enter. After you’ve purchased your TruMoo, enter TWO codes found on caps of specially marked Halloween Edition TruMoo® milk products, and receive between 1 and 100 song downloads. See official rules here. I could handle having 100 new songs on my playlist!